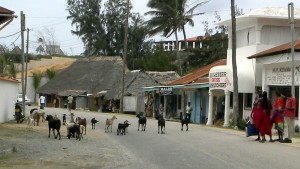 The current modern Watamu has a young history that can be traced from 1937 when an Irish family, the Flynns, wrecked around Watamu and were washed ashore on the current beach of Turtle Bay and where they lived in an upturned boat.
Back then Watamu was just a forest without population, except for the occasional fishermen from Malindi and Lamu (Bagiuni people, Bajuni in Swahili, Bajuni people descended from intermarriages between Giriama and Arab traders) who occasionally swam to shore when the sea was rough took refuge in thatched huts in Northern previous Beach, near present-day position of  Watamu village. The current development began around 1950-1960, when the British colonial government drew 50 pitches on the beach starting to lottizzarle for most of the white settlers in Kenya and all international visitors interested. This gave Watamu its appeal as a holiday destination. Lots rank from where it is now Blue Bay to the mouth of Mida Creek.
The indigenous people of Kenya were also included when the then government developed the system of settlement in Gede which covers the areas of Gede, Jimba, Dabaso and allowed the Mijikenda to buy land and settle.
Even the families of fishermen Bajuni began settling in the village of Watamu when the British government blew up a small part of the cliff to provide the gateway (Mlango in Swahili) to craft so they could dock closer to the shore, while the village was still protected from the cliffs during or before the Second World War. This allowed Watamu to have a large garden of coral and abundant fish for this community given that fisheries is the main economic activity and a ready market for vacationers to these beaches.

The first hotel to be built in Watamu was the Ocean Sports which started as a bar on the beach in Turtle Bay (the same place where the components of the first Irish family found themselves after the wreck), built by Ian Pritchard who landed there in 1951. The bar was later developed into a hotel and was the first center for water sports.
The second round hotel rooms was the Watamu Beach building that overlooked Watamu Bay.
The combination of these communities, with their different cultures and their economic activities, is what gave birth to Watamu, remains today a top destination for vacation as well as marine area rich in biodiversity. This area is assisted by the Kenya Wildlife Service, which in 1968 formed the Watamu National Marine Park and Reserve, which extends for 42 square kilometers along the coast, providing legal protection to the conservation area.
In 1979 in Watamu it was given greater international protection, when it was declared a United Nation’s Man and Biosphere Reserve (UNMBR).
Watamu today is a cosmopolitan society with a population of 2,000 inhabitants and has grown to be 16 hotels and resorts from two to five stars, numerous hotels and private villas and was voted as the second best beach sand in Africa by CNN Travel in 2012.

Watamu is a small town located about 105 km north of Mombasa and about 15 km south of Malindi on the Indian Ocean. Situated on a promontory between Watamu Bay and Blue Lagoon Bay it is part of Kilifi County. Its main economic activities are tourism and fishing. Watamu is famous for water sports such as snorkeling, scuba diving and skiing.
The name Watamu is a Swahili word that means “gentle people”, and this area was named in reference to the Swahili people friendly and kind that inhabit this area. However, other theories suggest that the Arabs used sweets to attract local and then capture them as slaves.
Watamu has been inhabited by Arab merchants who conquered much of the coast of Kenya in the early 18th century. According to archaeological finds, Watamu is said to have been inhabited since the 13th century. Shrines and holy sites, now ruins, are popular attractions (see Gedi Ruins).

Watamu, Kenya. Arrival of the fish 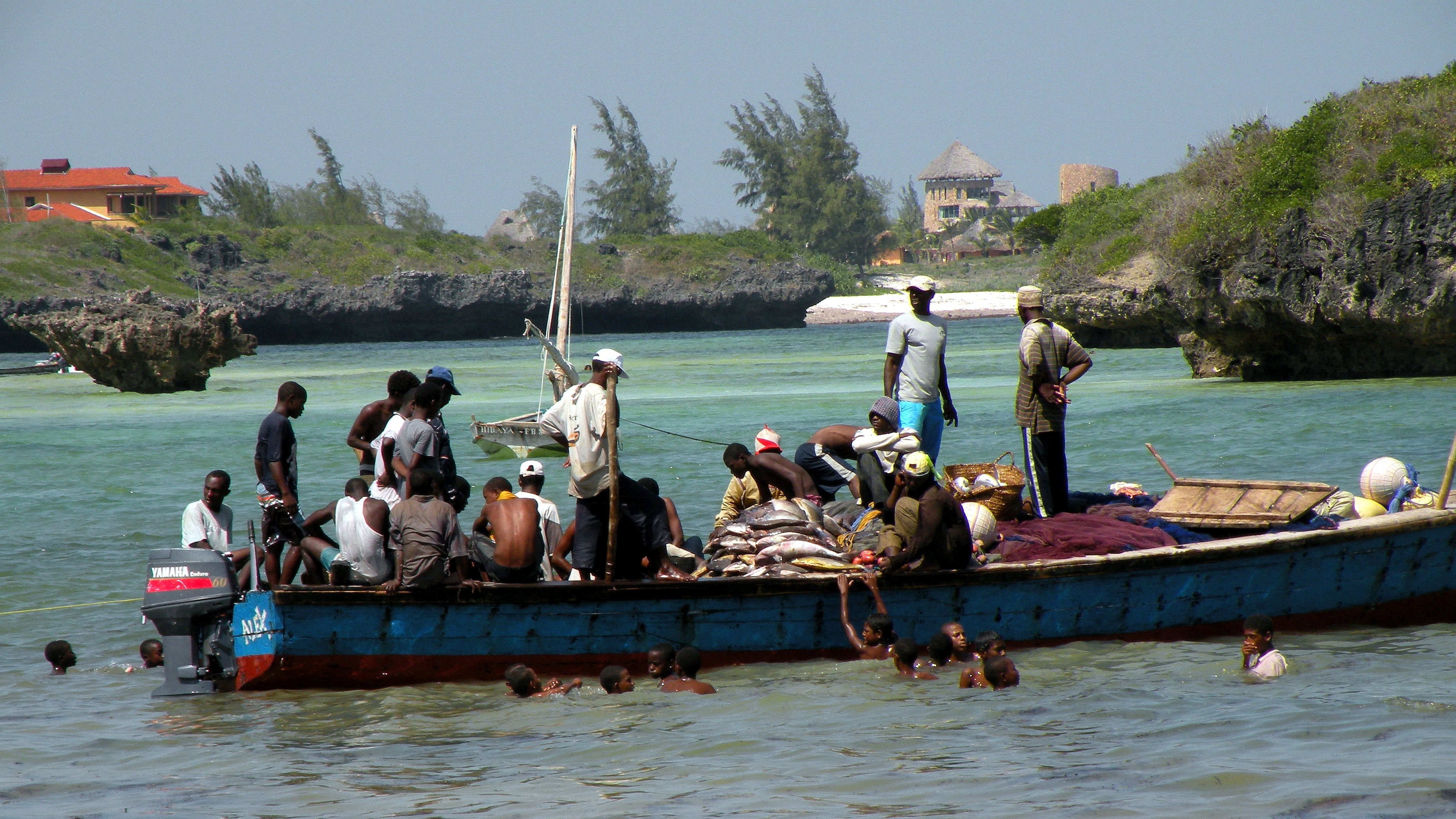 Watamu, Kenya. Arrival of the fish 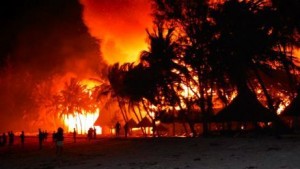 By travelogues “Giramondo”
September 4, 2007.
We left on August 20 for a stay of 15 days in Watamu at the Watamu Beach Hotel African Safari Club, was our first experience in Kenya, as a program a bit ‘of sun and two beautiful safari.
The Watamu beach is beautiful, long and low tide you get to walk to the beautiful stretches of sand in the face, there are algae, but only by the sea, do not stink and I do not have bothered.
The beach boys are present, but not as intrusive as I thought, approach offering all of their trips, but always so polite and friendly, as well as various vendors, after the first few days you get used to and are managed peacefully. The village of Watamu is very poor, there is a street full of shops (in fact shacks) turns well and in peace.
The hotel is in Kenyan style, very simple, our room overlooking the cliffs had stunning views, the food and the discreet management.
If my holiday had ended so I said, not expecting a phenomenal treatment, I advised the African Safari Club as a tour operator.
Instead do not recommend it strongly as a result of what happened to us, then everyone is free to think and to do what he sees fit.
On the evening of 28 August, while we were about ten people sitting at the bar chatting, playing feel the villages, we go out to see curious and we see that there are some people who run the hotel from side to side in silence, then we note in a hut near the pool, which is a fire, down there was the grill (hut with makuti roof or whatever it’s called …), no one puts out the fire, everyone runs just when after 10 minutes takes fire the roof then we all allarmiamo and decide to intervene, let the fire extinguishers, there are, but are water, expired in 2000, rusted and do not work, we find the sleeve, we find where to attack, but there is not enough pressure of ‘water and then nothing comes out, at this point from the hut on fire some lapilli end up on the roof, always in dry leaves, the main building that catches fire, then we understand that the situation is hopeless and we begin to wake up those who were sleeping in the rooms beside the fire, all the people gather on the beach, some with bags, others with nothing, only his pajamas, was blowing a gale, in about half an hour and everything is burned by sheer luck the fire has not extended to the village, when the fire was running we were able to go back in our room located in a higher position to recover the luggage, eventually we were all evacuated and transferred to other hotels in Shanzu African Safari Club no wounded but with great fear and a little ‘smoke in the lungs.
All’s well that ends well? Maybe !!!!!!!
A new odyssey begins Shanzu, we were without a referent always present to manage the crisis, we had to fight continuously for the treatment of drinks like in Watamu, garantitoci from them on our arrival in Shanzu, arrived without luggage recovered no notice and no control, we were us who take care of scoring on a sheet what came to who was given, came empty suitcases, some without clothes, but full of blankets and sheets of Watamu, just 2 baggage burned, 90% the stuff was not burned, but stolen … .some of us have returned to Watamu and have personally seen that only a small part of the room was actually burned, all the others had been looted after only about 20 people out of 100 wanted back before, because visibly shaken and with nothing, but we were not even allowed this, it was necessary to stop for a ‘last week.
The ASC has granted a bonus of 100 Euros to be spent only in the shops of the hotel room, where a bubble bath and shampoo cost 9 EUR 18, 80 Euros a costume and a beach towel 15, with shop assistants who were stonewalling and hid the last shampoo left in order to sell the “good customers” and to displaced persons from Watamu, plus many other messes wrong accounts, cold water, air conditioning not working, dilapidated beams in some rooms, and finally wakes up at 3.30 to catch the plane of 8:45 with the hotel 40 minutes away from the airport, what we have done in all that time? Quarreled to the accounts of the rooms … always wrong.
Final treat?
The Watamu Beach Hotel was already burned at least once more, even the complex where they moved after it was already burned two years ago and there was no visible fire extinguisher, or indications on where to find them.
Conclusions: fires can happen anywhere it is true, but this was the beginning gestibilissimo, we saw it with our own eyes, a working fire extinguisher at hand would have avoided all this, especially after fires had already previously.
If it happened at 3 am instead of the 23 it would be a tragedy because at that time no one would quickly notified the other.
The prices are relatively low at the expense of the safety of the guests, which I think comes first and that no one thinks when he buys a vacation, including me, at least until now.
No one expects European standards, but at least you, especially by a Swiss tour operator !!!

Comment: Mara28
September 9, 2007
Bad story…
I’ve been to Watamu Beach few years ago and even then the situation was dramatic … rooms without windows, poor cleaning and the rats who went in the restaurant area … okay that is Africa, but the impression was that the African Safari wanted just make money and save as much as possible on maintenance village.
It’s a shame because the hotel is in a beautiful area and the people of Watamu, which lives thanks to tourists, not worth a blow like !!

History is a trace of our and other existence, as well as preserving usages, traditions and customs

Read the following blogs : (When necessary use translators)